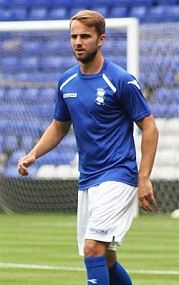 Selections from the first round of the Capital One Cup make up the best bets for this week’s football accumulator tips on Sportingly Better, returning odds of 4.26 on the treble.

Birmingham will be hoping to put their opening day defeat to Watford behind them, with victory in the first round of the Capital One Cup on Tuesday.

The hosts carry history in the competition after famously lifting the trophy back in 2011, with the Blues having only failed to reach the second round on one occasion in the last nine years.

Visitors Plymouth have lost 12 of their last 18 games on the road; a trend you can follow on our soccer stats page.

Birmingham have won seven out of their last eight encounters with Plymouth in all competitions and John Sheridan’s poor-travelling side look odds on to suffer yet another defeat away from home tonight.

League Two favourites Portsmouth suffered a shock 4-1 defeat at home to Oxford last weekend, but the Fratton Park outfit will be hoping to bounce back and restore some local pride against rivals Bournemouth on Tuesday.

Pompey will be looking for their new summer signings to gel quickly under manager Guy Whittingham, but the south coast side will have their work cut out against Eddie Howe’s high-flying Bournemouth.

The Cherries picked up a 2-1 victory over Charlton on the opening game of the season last weekend and Dean Court is likely to be near capacity again for the game against Portsmouth.

League One side Bristol Rovers will be without nine first team players tonight as Championship side Watford visit the Memorial Stadium.

John Ward’s entire bench was made up of under-20’s in the 2-1 defeat against Exeter on the weekend and the same can be expected in tonight’s first round Capital One Cup clash.

Opponents Watford kicked off their 2013/2014 Championship campaign with an away win against Birmingham on Saturday and although the Hornets seem to have lost some of their firepower, Gianfranco Zola’s side look again well equipped to make a charge for promotion.

Watford have won eight of their last nine meetings against Bristol Rovers in all competitions and the Hornets should extend that record against injury-hit Bristol Rovers on Tuesday.