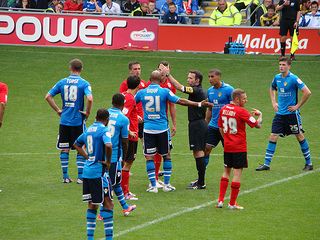 Last weekend our winning accumulator bet returned odds of 6.70, as we backed wins for Manchester City, Watford and Northampton.

Selections from the Championship, Football League and the Premiership make up the bets for this weekend’s football accumulator tips, returning odds of 5.05 for the treble.

Neil Warnock could name an unchanged side for the third successive game in a row as the Whites look to make a late surge for the play-offs.

Leeds have won seven of their last eight home matches in the Championship, with league leaders Cardiff the only side to take points away from Neil Warnock’s side at Elland Road over that period.

Opponents Millwall have lost five of their last six games in the league, but Kenny Jackett’s side did pick up a win at the Riverside last time out.

Leeds have kept clean sheets in five of their last seven matches at home in the Championship and Neil Warnock’s side could close out a vital three points on Saturday.

A 2-1 win away at Crawley last time out moved Brentford to within four points of League One leaders Doncaster and the Bees will be looking to make a late push for automatic promotion this season.

Brentford enjoy the best record at home in the league, losing just twice at Griffin Park, but Uwe Rosler’s side have been distracted by runs in the FA Cup in recent weeks.

Opponents Scunthorpe have scored just three goals in their last six games and losing Leon Clarke in January was a big blow for the Iron. Eighteenth placed Scunthorpe could welcome back skipper Paul Reid, but striker Akpo Sodje could again miss out.

Brentford are undefeated in 18 of their last 20 matches in League One and although this fixture as a history of finishing as a draw, the Bees could reignite their automatic promotion claims with a win over Brian Laws’ side.

Chelsea’s defeat to Manchester City pushed the Blues down into fourth place last weekend, but Rafa Benitez will be keen to ensure Roman Abramovich’s side at least qualify for the Champions League before leaving the club at the end of the season.

Only QPR and leaders Manchester United have took maximum points off Chelsea at Stamford Bridge this season and a win on Saturday could see the Blues go back above Tottenham in the table.

Opponents West Brom will be without top scorer Romelu Lukaku, who is ineligible to face his parent club, so the threat of Steve Clarke’s attack should be significantly reduced given the Belgium international’s recent form the Baggies.

Chelsea have won their last six home matches against West Brom in all competitions and despite the inconsistency and hostility at Stamford Bridge, the Blues should record a vital three points this weekend.