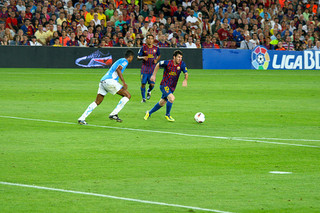 The 23 man FIFA Ballon d’Or shortlist was announced last week, with La Liga based players dominating the list of nominees and it is Barcelona’s Lionel Messi and Real Madrid’s Cristiano Ronaldo who are again expected to battle it out for the much-coveted prize.

FIFA’s shortlist will be shortened to just three players on 29 November and the two names that will almost certainly still be in the hat will be that of Lionel Messi and Cristiano Ronaldo.

Real Madrid coach Jose Mourinho was at pains to separate the two players, saying “I don’t want to have to think about the Ballon d’Or, choosing who is the best in the world should be banned. They are two players from another planet.”, whilst former France striker David Trezeguet shared similar thoughts; “there’s no doubt that Cristiano Ronaldo and Messi continue to be a class apart. They’re both players of the highest level and I think they share the same ambition: to outdo the other.”

It is Barcelona’s Lionel Messi that contains the bragging rights however, after scooping the last three titles in succession.

Messi’s 50 goals and 19 assists in La Liga last season surpassed the ridiculous, although his own personal crusade was not enough to help his beloved Barcelona lift the league title. The Argentinean striker dominated the Champions League goalscoring charts last season with 14 goals and the diminutive forward scored in the 2012 Copa del Rey final as Barcelona lifted the trophy following a 3-0 victory against Athletic Bilbao.

Messi has started this season in similar splendor with 13 goals in nine La Liga games, helping Barcelona to race away in the league, whilst edging out Cristinao Ronaldo in the goalscoring charts in the process.

Not to be outdone, Cristiano Ronaldo hit a phenomenal 46 goals for Real Madrid last season, helping the capital side to their first domestic title in four years. Ronaldo’s 10 goals in the Champions League last season looks certain to be surpassed this year with the Portuguese star having already found the net five times in this season’s competition.

Colombian striker Radamel Falcao, whose goals helped Atletico Madrid lift the Europa League and Super Cup last season is worthy of special commendation, but it is Messi and Ronaldo who will again battle it out with the Barcelona forward expected to secure an unprecedented fourth title.