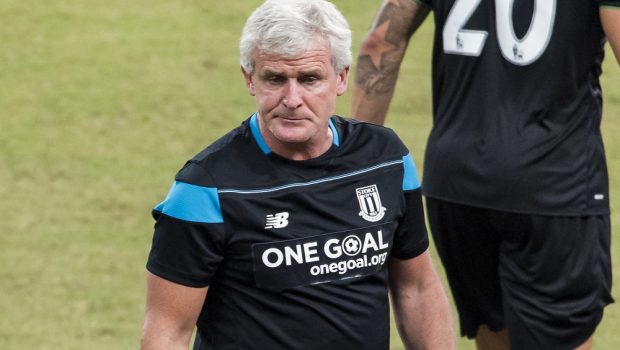 Back Stoke to Finish in the Bottom Half

A lacklustre summer of activity for Mark Hughes and Stoke City so far have failed to set the Potteries alight and with a number players having left the Britannia Stadium, attention has turned towards the ambition of the club.

Sportingly Better takes a look at why an unstrengthened Stoke side are a sure bet to finish in the bottom half this campaign.

After three consecutive ninth-placed finishes, Stoke dropped to a 13th placed finish last time out and the betting odds (1.40) on the club falling out of the top 10 again hold plenty of appeal, with free bets at biggestfreeBets just one of the ways to pick up a free antepost bet on this market currently.

Stalwarts Jon Walters and Glenn Whelan have all left the Britannia Stadium alongside loanee Wilfried Bony recently and although their exits may have not have been too heartfelt, their movements did at least provide a fresh opportunity to breathe new life into the club; an opportunity that has so far failed to have been taken.

The signing of promising full back Josh Tymon from Hull remains one largely for the future and although the recruitment of Chelsea defender Kurt Zouma does carry an element of quality, there has been very little else to suggest that the club will bring in further reinforcements that are needed to prevent the club from slipping further down the table.

In terms of all the transfers out of the club it is the £20m deal for Austria international Marko Arnautovic to West Ham that will carry the most impact.

At 28 years old, a fee in that region evidently proved too difficult for Peter Coates and the board to turn down, but the switch to table-rivals West Ham will count as a double negative for the club.

Arnautovic scored seven goals in 35 games last season and at times the player often proved to be the spark for the Potters and a difference that seemed to at last, be brought more consistently to the table.

Quite tellingly the player cited West Ham’s ambition on more than one occasion in his press conference unveiling, a statement that seemed to have spoke more in terms of the club he left, than the one he joined.

An unambitious campaign is likely to be on the cards for Stoke this season and the biggest negative remains the current inadequacies in the transfer market, especially compared to other sides in the English top flight.

With a wildly risky trust in Saido Berahino to lead the line and historical injury concerns over some of their most influential players, take the betting odds of 1.40 on Stoke to finish in the bottom half of the Premier League, whilst you still can.

Recommended Football Tips
Back Stoke to finish in the bottom half @1.40