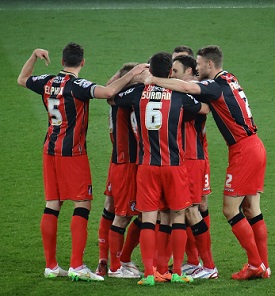 Back Bournemouth to Finish Bottom

The Premier League’s youngest manager may have been encourage by recent performances from his side, but the south coast’s habit of dropping points (nine) from winning positions is unlikely to help the club’s cause to beat the drop this term.

Bournemouth have of course struggled with long-term injuries to key players Tyrone Mings, Max Gradel and Callum Wilson, but a porous defence and a cavalier approach may ultimately not prove to be the route to safety.

The club’s backline as well does look increasingly vulnerable, with the club having already conceded five goal hauls against the likes of both Manchester City and Tottenham.

Bournemouth’s best spells have come before the break and if the Cherries can come flying out of the traps and keep hold of their lead, then Eddie Howe’s endeavour may find some reward.

New American investment and significant sponsorship from Mansion Group – a leading online gambling business that owns several online casinos like Casino.com, has given the club a stable financial platform to build upon, but the club is not expected to go on a spending spree in January according to Cherries chairman Jeff Mostyn.

Transfer rumours linking the club for a winter loan move for striker Bradley Wright-Phillips have been mooted and given the club’s long term injury list, the likelihood of replacements being brought in does seem likely, especially given the club’s current miserable run of form.

Bournemouth remain within touching distance of bottom side Aston Villa and that gap does not seem too far away, with the Cherries struggling to keep the ball out of the back of the net with one of the worst defensive records in the Premier League.

Bournemouth’s confidence in Eddie Howe does seem unwavering with the board having recently extended the manager’s contract, but a general lack of quality and Premier League experience may be quite telling for the club and manager come the end of the season.

Recommended Football Tips
Back Bournemouth to finish bottom of the Premier League @6.00