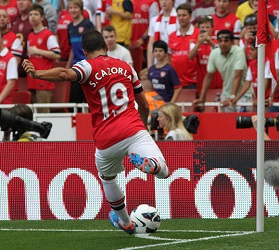 Premier League leaders Arsenal take on north London rivals Tottenham in the FA Cup on Saturday, with both sides looking to secure qualification into the fourth round.

Tottenham’s 2-1 victory at Old Trafford on Sunday increased Tim Sherwood’s unbeaten run as manager to four games in the Premier League, as the new coach targets a famous victory over arch rivals Arsenal in the FA Cup.

Striker Emmanuel Adebayor has played a key-part in Sherwood’s new look attacking 4-4-2 side alongside Roberto Soldado up front, but the Togo forward remains doubtful for Saturday’s game after being stretchered off late on at Old Trafford.

Tottenham have won just one of their last 18 matches against Arsenal in all competitions, but Sherwood’s side will lack little in the way of confidence after beating the defending Premier League champions during the week.

Jan Vertonghen, Sandro, Paulinho, Jermain Defoe, Andros Townsend and Younes Kaboul are all sidelined so a repeat of Wednesday’s starting XI is a possibility.

Hosts Arsenal secured a comfortable 2-0 victory over Cardiff in the Premier League on New Year’s Day to start 2014 at the top of the tree, but the lack of silverware in Arsene Wenger’s cabinet could see the French tactician fielding a strong line-up on Saturday.

Injuries too have accumulated on the Gunners bench with Aaron Ramsey, Mesut Ozil, Kieran Gibbs, Alex Oxlade Chamberlain and Nicklas Bendtner all ruled out. Santi Cazorla is likely to get a rare start, whilst Lukas Podolski could replace injury doubt Olivier Giroud this weekend.

Arsenal like Tottenham picked up an impressive 10 points out of a possible 12 over the festive period, but the Gunners look the most likely team to rotate on Saturday.

This fixture has a history of being high-scoring with the last six meetings producing 27 goals and both sides will look to attack in another highly contested north London derby.