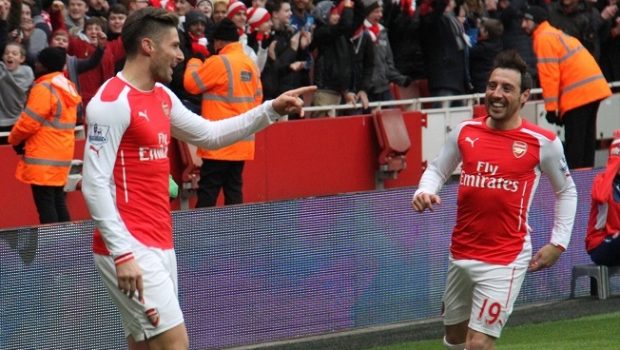 Back Arsenal for Another Top Four Finish

Olivier Giroud’s 89th-minute equaliser against Manchester United in the early kick-off on Saturday rescued a point for Arsenal in a match they scarcely deserved anything from.

SportinglyBetter.com analyses why the Gunners are however still a solid choice to finish in the top four this season.

Since losing to Liverpool on the opening day of the campaign, Arsenal have gone 10 games without defeat, as they bid to win a first Premier League title since 2004.

The Gunners currently sit in fourth place in the Premier League table after 11 games, but the club crucially are just two points behind league-leaders Liverpool

Arsene Wenger’s sides have already qualified for the last-16 stage of the Champions League and a victory over Paris Saint-Germain could see the club advance to the knockout round as group winners for the first time since the 2011-12 campaign.

If nothing else, their form in Europe’s elite club competition tells us one thing: Arsenal are strong contenders for silverware this season.

An EFL Cup quarter-final match against Southampton later this month in front of an expectant Emirates Stadium looks surmountable and hopes of a title charge in the Premiership appear to be initially possible despite failing to lift the title for more than 12 years.

The Gunners find themselves fighting on multiple fronts this season and supporters will once again be quietly confident of securing at least one major trophy going into Christmas.

Arsenal are currently as big as 7.00 to win the Premiership title and Paddy Power punters can get some of the best football odds around on the Gunners as they look to lay down the gauntlet to their rivals.

Arsenal have avoided defeat in each of their last 16 matches in all competitions and in Alexis Sanchez, Mesut Ozil and Theo Walcott, Arsenal have one of the strongest attacking units in the top flight.

With that attack the Gunners have been imperious this season, netting 24 goals in 11 games, even with France international Olivier Giroud falling out of favour in the opening stages of the campaign, whilst at the other end the Gunners have already kept four clean sheets in the Premiership this term.

The arrival of Shkodran Mustafi has been a welcome sight in the first few months of the campaign for Arsene Wenger, with the Germany international forging an instant partnership ahead of Petr Cech with Laurent Koscielny in the heart of the Gunners defence.

A tight-knit centre-half partnership is certainly needed to challenge for the Premier League crown and both men could prove to be as key to Arsenal’s title hopes as the attacking trident of Ozil, Walcott and Sanchez already has.

Speculation surrounding Arsene Wenger’s future at the club continues to intensify moving into the New Year and although the Frenchman would love to secure the Premier League crown, another top-four finish in the English top flight holds more than enough appeal in the ante-post betting markets.

Recommended Football Tips
Back Arsenal to finish in the top-four @1.44