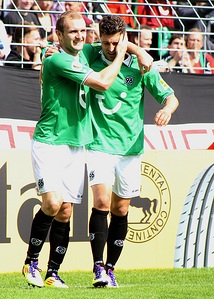 Selections from Serie A, the Bundesliga and the Premier League make up the bets in this week’s football accumulator tips, returning odds of 5.92 for the treble.

Juventus are undefeated in 35 of their last 38 matches in Serie A, but the current league leaders sit only three points ahead of Napoli.

The Italian champions boast the best defensive record in the division, but defenders Giorgio Chiellini and Leonardo Bonucci will be missing on Saturday.

Fiorentina have conceded 18 goals away from home, exactly double the amount of goals that the Viola have conceded at the Stadio Artemio Franchi this season, but Vicenzo Montella is a young and talented manager that Fiorentina will do well to hold onto.

Juventus are undefeated in nine matches against Fiorentina in all competitions and Antonio Conte will be eager to maintain Juventus’ advantage over Napoli on Saturday.

Tenth meets sixteenth in the Bundesliga this weekend, but it is the host’s Hannover who are looking up the table.

Die Roten are undefeated in 26 of their last 28 home matches in the Bundesliga and recent victories over Bayer Leverkusen and Wolfsburg illustrate just how well Hannover play at the AWD Arena.

Visitors Hoffenheim have the worst defensive record in the Bundesliga and new manager Marco Kurz will need to address his side’s defending issues, especially from set plays.

Hoffenheim are in danger of relegation this season and Kurz’s side also claim the title of having the worst away record in the division.

Hannover will be looking to make home advantage count on Saturday as they look to improve their chances of European qualification this season.

Manchester United have won 11 of their last 13 games in the league and the Premiership leaders sit nine points clear at the top of the table.

Sir Alex Ferguson’s side have scored at least two goals in 15 of their last 16 home matches in the league and the Red Devils have enjoyed a dominant record at Old Trafford this season.

Visitors Everton still have hopes of Champions League football, but the Toffees have only won one of their last five games in the league.

David Moyes’ side have lost only three times this season and with Everton’s propensity to finish games 2-2, backing the Premier League’s top scorers to net twice on Sunday seems the best play.

Betting Accumulator Odds – 5.92 (wins for Juventus and Hannover and Manchester United to score two or more goals against Everton)