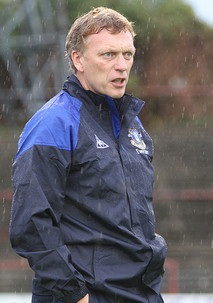 Selections from the Premiership and Football League make up the bets for this weekend’s football accumulator tips, returning odds of 5.55 on the treble.

Last weekend’s victory over Carlisle finally secured Bournemouth’s promotion to the Championship and the League One leaders could wrap up the title with a win at Prenton Park on Saturday.

The Cherries have won their last eight matches in League One and Eddie Howe’s side will be desperate to be crowned champions, despite being refused permission to lift the trophy if they win on Saturday.

Opponents Tranmere have seen their season implode after a run of 13 defeats in their last 20 matches and the Superwhites look devoid of confidence after failing to score in any of their last five matches in the league.

Bournemouth go into the weekend as the most in-form team in the division and the Cherries will be targeting all three points to secure the League One title on Saturday.

Everton’s defeat at the Stadium of Light last weekend all but ended the Toffees hopes of European football, but manager David Moyes will be keen to secure another top-six finish in the Premier League.

Everton have won their last four matches at Goodison Park and the loss to Chelsea in December has been the Merseyside club’s only defeat at home in the league this season.

Everton have been winning at both half time and full time in their last four matches at home in the Premier League. Back Everton HT/FT at 2.30.

Opponents Fulham have lost three of their last four matches in the league, but the possibility of a top half finish still exists for manager Martin Jol.

Fulham have an extremely poor record in this fixture; losing 12 of their last 13 matches at Goodison Park and Everton should make home advantage count and secure all three points on Saturday.

Seven wins in their last 11 games was not enough for Leyton Orient to make the play-offs this season, but Russell Slade’s side will be hoping to finish the season on a high note, with Oldham the visitors to the Matchroom Stadium.

The O’s have won each of their last five games at home in League One and the return of striker Charlie MacDonald should boost the goalscoring options for the London side.

Opponents Oldham secured their League One status earlier in the month after picking up wins against Bury, Yeovil and Crawley Town and the Latics will have a busy summer ahead of them if they are to progress up the league table next season.

Oldham manager Lee Johnson has indicated that he may give a number of youngsters their chance to play, but it’s Leyton Orient who should pick up all three points on Saturday.

Win a Free Bet Every Week on your Accumulator!