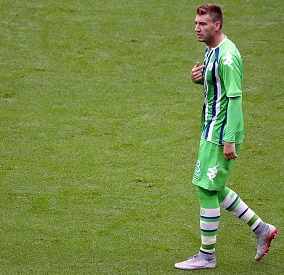 Football tips come from Ligue 1, the Bundesliga and the Eredivisie provide the betting tips for this week’s football accumulator on Sportingly Better.

Runaway Ligue 1 leaders PSG will be looking to continue their unbeaten league campaign after winning 22 of 26 games in the French top flight.

Reims are just one of four sides to take points off Lauren Blanc’s side after a 1-1 draw in the reverse fixture, but PSG will be buoyed by an impressive victory over Chelsea in Champions League midweek.

Visitors Reims sit just one place above the relegation zone, but PSG’s domination should see the home side ease again to victory this weekend.

Wolfsburg’s win over Ingolstadt last time out arrested a run of seven games without a win in the Bundesliga, whilst a 3-2 win away at Gent in the Champions League, will have given the club some hope of bouncing back from a poor start to 2016.

The visitors sit five points off Bayer Leverkusen, who occupy the last Champions League place, but hosts Hertha Berlin do boast a very good record at home with just one defeat in their last 10 matches.

Opponents Wolfsburg have won just once away from home in the Bundesliga all season and despite the loss of of former Chelsea forward Salomon Kalou, the hosts should come away with a positive result.

Twente have started to turn their disastrous season around with three victories in a row.

Before those consecutive wins they had picked up just 16 points from a possible 60 in the league and were just three points above their opposition this weekend.

Opponents Cambuur have recorded six straight defeats since their return from the winter break and the likelihood of a seventh seems likely, with the visitors having lost their last three meetings away at Twente.