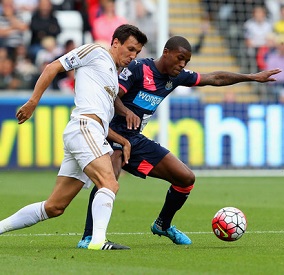 Selections from the Premier League, Football League and Scottish Championship make up the legs in this week’s football accumulator on Sportingly Better.

Newcastle sit at the bottom of the table as Steve McLaren was handed further heartache by Slaven Bilic. Eight years after Bilic knocked McLaren’s England out of Euro 2008 at Wembley, West Ham condemned Newcastle to the foot of the table with a 2-0 defeat that also took Newcastle below rivals Sunderland in the process.

Mike Ashley’s tenure at Newcastle has been under scrutiny for years, but this summer he backed McLaren in the transfer market with a number of high profile signings. A return of two points from five games is hardly the return a change in transfer policy was expected to yield

Next up is Premier League newcomers, Watford who sit comfortably in 13th place. The Hornets have had two tricky away fixtures in the Premier League since returning to the top flight and trips to Goodison Park and the Etihad Stadium are now followed up by a visit to St.James Park, where Newcastle will be looking for their first league win of the season.

Newcastle can’t afford to lose the match here in front of the Toon Army, so the added insurance if it’s a draw can be used in this tip.

Blackpool’s demise continues to freefall and following on from the Tangerines relegation from the Championship last year, the seasiders are now sitting in 23rd place, with only Crewe below them in League 1.

Barnsley have been tipped for a play-off place this season, but the visitors have made an inconsistent start to the season.

The Tykes almost knocked Everton out of the Capital One Cup with a spirited performance and also hammered Swindon in their last fixture 4-1.

The hosts have lost five out of their last seven league games and look favourites to suffer relegation again this term and with four places now in-line for the drop the seasiders will feel the odds will be stacked against them.

Barnsley have won three of their last four matches on their travels and will be confident of extending that run with a win on the seaside.

Hibernian face a tough task this season trying to dislodge Rangers who appear to be running away with the division.

Away defeats to Rangers and Dumbarton have put them nine points behind Rangers with a game in hand and they’ll need to take three points from bottom placed Livingston to keep chase.

Livingston have picked up just one point from their opening six games and have lost all three league games at home this season, with defeats to Queen of the South, Falkirk and Morton.

The visitors have won four of the last five meetings between the two sides at Livingston and an away win looks set to be on the cards.