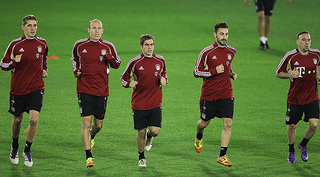 With the UK football schedule being disrupted by the weather, Sportingly Better takes a look at the European fixtures using a wide variety of betting markets.

Our football accumulator tips this weekend come from the Premier League, Bundesliga and Ligue 1 worth odds of 3.70.

Only PSG have defeated leaders Lyon over the last seven league games and les Gones remain firmly in the hunt for le Championnat.

Lyon have the best home record in the division; winning eight of 10 matches at Stade de Gerland, whilst 18th placed Evian have lost seven of their 10 away matches in Ligue 1 this season.

Bafetimbi Gomis has scored 11 goals for Lyon, with Lissandro Lopez also chipping in well, but it is veteran midfielder Steed Malbranque that has enjoyed a renaissance in midfield.

Les Gones have scored well over two goals a game at home this season and the league leaders should pick up all three points on Friday night.

Manchester City have won their last three games on the bounce and the Premier League champions appear to have found some much needed urgency in their attempt to retain their Premier League crown.

Roberto Mancini’s side have scored nine goals in their last three league games, so the return of Sergio Aguero should boost the Citizens‘ attack even further.

Opponents Fulham have won just one of their last six games in the league and 23 of the 38 goals the Cottagers have conceded have come away from home.

Manchester City have a dominant record at the Etihad Stadium winning 31 of their last 35 home matches in the league and the Premier League champions should be too strong for Fulham.

League leaders Bayern Munich sit nine points clear of Bayer Leverkusen and the Bavarians will be looking for a comprehensive display against bottom side Greuther Furth.

Bayern Munich are unbeaten in 18 of their last 19 home games in the Bundesliga and the work of Jupp Heynckes’ before the winter break has been impressive. Just seven goals have been conceded and the +37 goal difference is the best of any team after 17 games.

Opponents Greuther Furth have failed to win their last 15 games in the Bundesliga and Mike Buskens’ side are also the lowest scorers in the division.

Greuther have netted just once in the last five matches, so a Bayern victory to nil could be on the cards on Saturday.

Betting Accumulator Odds – 3.70 (Lyon to score two or more goals, Manchester City -1 on the Asian Handicap and Bayern to win to nil)