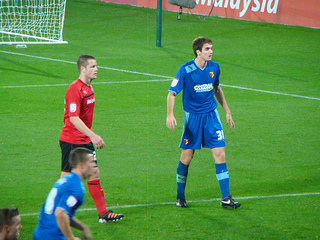 Last weekend our winning accumulator bet returned odds of 5.92, as we backed wins for Hannover and Juventus as well as Manchester United to score at least two goals against Everton.

Selections from the Championship, Football League and FA Cup make up the bets for this weekend’s football accumulator tips, returning odds of 5.49 for the treble.

Birmingham’s draw at Charlton last weekend extended the Blues‘ unbeaten run to five games in the league, but Lee Clark’s side still remain only four points above the drop zone.

Birmingham have kept only two clean sheets at St Andrews all season and the Midlands club have now gone 16 games in the Championship without registering a clean sheet.

Visitors Watford are the Championship’s top scorers with 60 goals and the Pozzo-enriched squad are emerging as genuine promotion contenders this season.

The Hornets have scored two or more goals in eight of their last nine games in the Championship and Gianfranco Zola’s high-flying side will need to score a similar amount of goals on Saturday if they are to continue their climb up the table.

Walsall’s victory over Doncaster last weekend made the rest of the division stand up and take notice, as League One’s most in-form side edged closer to the play-offs.

The Saddlers have won eight of their last 10 matches in the league, but League One Manager of the Month Dean Smith is taking each game as it comes.

Opponents Notts County have won only twice in 11 games in the league; a run of form which ultimately cost manager Keith Curle his job.

The Magpies only victory on the road in their last eight games has come against Portsmouth, but Chris Kiwomya’s side have at least been boosted by the loan signing of Leicester striker Jacob Blyth.

High-flying Walsall have scored two or more goals in five of their last six games in League One and Dean Smith’s side should be too strong for Notts County on Saturday.

Arsenal kept pace with Tottenham in the Premier League last weekend after a 1-0 victory at the Stadium of Light and the Gunners will be keen to maintain their momentum against Blackburn in the FA Cup on Saturday.

Arsene Wenger is expected to make a number of changes for the match against Blackburn, with Diaby, Alex Oxlade-Chamberlain and Carl Jenkinson all coming in.

Opponents Blackburn have recruited defender Karim Rekik and midfielder David Bentley on loan deals this week and the arrival of both players could give Rovers a boost going into the match.

Blackburn manager Michael Appleton has confirmed his side will “have a go and see if we can make a surprise” at the Emirates Stadium meaning goals could be on the cards on Saturday.

This fixture has been responsible for some heavy scorelines in the past and the odds on over 2.5 goals look favourable given the history of the past few meetings between the sides.

Betting Accumulator Odds – 5.49 (victory for Walsall, over 2.5 goals in Arsenal’s FA Cup clash with Blackburn and both teams to score in the Championship match between Birmingham and Watford)