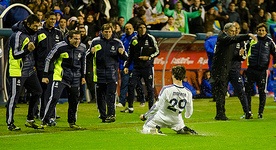 Our football accumulator tips includes a both teams to score selection in the Premiership and a home and away win in La Liga worth odds of 5.44.

Goals from Roberto Soldado and Tino Costa helped secure Valencia’s passage into the next round of the Copa del Rey on Tuesday, whilst their form at the Mestalla this season has been solid with six wins from nine games in La Liga.

Opponents Sevilla have won only one of their last six games in La Liga and that was a 1-0 victory against bottom club Osasuna last time out.

Los Rojiblancos have conceded two or more goals in their last six games on the road in the league and even though Sevilla enjoy a strong head to head record against Valencia, it’s the hosts that have the best chance of winning on Saturday.

Everton’s victory against Newcastle last time out set a new record in the Premier League as the Toffees became the first club to both score and concede in 16 consecutive games.

David Moyes’ side have been more prolific this season and the move to push Marouane Fellaini higher up the pitch has certainly paid off for Everton. The Toffees have missed his protection further back, leaving Everton to register just one clean sheet at home all season.

Opponents Swansea are coming off the back of a clinical 2-0 victory at Stamford Bridge in the Capital One Cup semi-final on Wednesday, with leading scorer Michu grabbing both goals.

The Swans have scored two goals in each of their last four games in all competitions and although energy levels may be down, Michael Laudrup’s side should find the net at Goodison Park on Saturday.

Rock bottom Osasuna have won just three of their 18 games in La Liga this season, but Los Rojillos have beat Real Madrid twice in the last four league meetings in Pamplona.

La Liga’s joint lowest goalscorers have managed just eight goals at El Sadar this season and the tendency under manager Jose Luis Mendilibar has always been to keep games tight.

Visitors Real Madrid will be without leading scorer Cristiano Ronaldo on Saturday who is suspended, whilst first choice centre-backs Sergio Ramos and Pepe will both be missing.

Real Madrid have scored at least two goals in 13 of their last 14 matches in La Liga and the Spanish champions should be too strong for their shot-shy opponents this weekend.

Betting Accumulator Odds – 5.44 (Wins for Valencia and Real Madrid and both teams to score in the Everton v Swansea match)